In 2013, just a year before I graduate from college,  hackathons were all the rage. Naturally, I participated in a lot of them and ended up not only making new friends but also learning a lot in the process. There are trails of artifacts(youtube videos, blogs, etc.) of me participating in these events. Unfortunately, some of the links were taken down but here is what I found.

I spent a weekend at Earlham College working on a project with other students from across ohio colleges and universities. The representative of Intel asked me to write about my experience. It was published on the Intel Blog. I couldn't find the exact entry, but I did find an archive of it online.

Here is what it said:

My name is Jean Paul Mugizi. I am a junior at Miami University of Ohio majoring in Software Engineering. Attending the Intel Hackathon 2013 has been a unique experience for me as I chance to network with students from Erlham College, Indiana University, and Miami University working together to write a data visualization board for climate trends.

The beauty of computer science is the variety of tools available to tackle problems. There is no one set way of solving problems. We have decided to  Combine individual knowledges and divide into teams that are going to tackle pieces of the problem(back-end, front-end, and communication between the two) and fit them together at the end to produce a robust data vizualization web application. One thing that is unique about the experience is how much fun we are having doing it. During our breaks, we played ultimate frisbee, streaks 'N tips, and listened to music.

So far, my team is working on a  back-end set up using  an SQL database holding weather data containing things such as temperature, longitude, latitude, altitude, city, state, and date/time of occurence. An another team is working on a front-end using Twitter Bootstrap, Google Maps API, and  jqplot to take the data from the database and display it visualy to show climate trends and weather patterns.

This is definitely a fun-filled 24 hours and I have enjoyed spend time with not only  motivated and  brilliant  classmates to do something meaningful that can be used in the long-term to tackle climate change problems, but also learn from industry experts and professors about creative and innovative  ways of solving such problems. It is still a work in progress and I am hoping to get as much out of the remaining time as I have in the past 7 hours.

- PostGresSQL(our relational database) is up and running! Also, PHP 5.3 and LittleFe Server have been set-up and ready to go.We are also now able to parse data from different weather websites using a Perl script to write them in XML data representation so that they can be plotted in a database using Insert statements  We have also parsed SQL queries into JSON representations that the front-end developers are going to call in order to access that data

- As far as front-end goes, a separate team has been able to make a visual climate trend using JqPlot and add three weather data components(temperature,precipitation, and Carbon Dioxide). They are now trying to find a creative way to represent those three components distinctively. For instance, they are thinking of using different colors for temperatures(red for high, yellow for medium, and blue for low) and colored triangles or square for other datas. We have still thinking various ideas of doing such representation in a manner that the user understand the best. Keep in mind that Twitter Boostrap also allows for responsive design, so this takes care of automatic resizing when moving from a computer to a tablet or tablet to smartphone and vice-versa.

In my second internship in the Seattle-Bellevue area, I went to a weekend startup pitch competition where a couple folks and I presented about Sameday Global: you can think of it as Uber for small international shipments. Essentially, instead of you paying exorbitant amounts to ship a package to another country via DHL/FedEx, you could give the package to a person traveling to that destination so they can take it for you. It could be a small fracture of the price that you pay today, but carries a few logistical and security concerns that couldn't be addressed during the 48hours of the pitch competition. 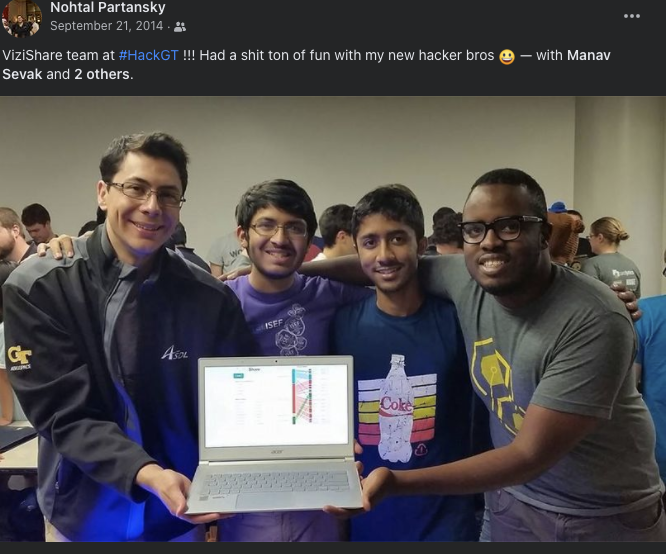 Now, this was a LOT of fun! I flew in from Dayton, Ohio to Atlanta, GA after I was offered a hackathon scholarship by the awesome folks who organize HackGT. I met Nohtal(leftmost), Manav, and Tejas that night at the Klaus Advanced Computing Building where the hackathon was being held. We were awake for 48 hours laughing, hacking on data viz projects, pivoting,and generally just having this sense of camaderie and enthusiam on what's possible in computer science.

After the hackathon, I've kept in touch periodically with my hacker bros through Facebook and wow, what an impressive brilliant group of folks. Nohtal and Manav went on to start successful world changing companies : Rise Robotics and Memora Health respectively. It was one of the most memorable moments of my computer science education and I feel fortunate to have crossed paths with them.